Living in Kashmir is fraught with difficulties, but it is time we become the change we want to see in the Valley,” says Mehvish Mushtaq, a Srinagar resident who knows how to walk the talk. On February 28, the 24-year-old engineer became the first Kashmiri to launch the Android app, Dial Kashmir, which lists over 500 contacts (addresses, email ids and phone numbers) of government departments and private offices and services. The app is divided into two categories -- Essential Services (hospitals, fire brigades, ambulances, newspapers, educational institutions, grievance cells and the municipal corporation) and Commercial Services (hotels, houseboats, Kashmiri products, pharmacies, NGOs, real estate organisations, tour and travel companies and wazas, the traditional Kashmiri cooks). Mushtaq is currently working on adding more categories, such as courier services, journalists, lawyers, doctors, BPOs, construction companies and so on.

“Technology fascinated me since a very young age. I still remember how excited I was when my parents got me a computer when I was in grade seven. I tinkered with the hardware and software until I knew it all in and out,” smiles Mushtaq over the telephone. She adds that her father, a retired Indian Foreign Officer and her mother, a homemaker, were very encouraging of their “tech geek” daughter.

Mehvish Mushtaq is the first woman from Kashmir to have designed an Android app. Dial Kashmir helps locals report civic issues and access emergency services
Mushtaq, who studied computer engineering from SSM College of Engineering and Technology at Pattan, Baramullah district in north Kashmir, did an online course in app development in January. “As part of the course, we had to design an app. That’s when I first thought of developing Dial Kashmir.”
Unlike many other Indian cities, locals in Kashmir have no access to directories such as the Yellow Pages or an online portal where they could access information on essential services. “Unfortunately, it is a way of life here -- so often, when I need a contact detail, and if I don’t have access to the specific website, I find myself asking my friends, who in turn get in touch with their friends for help. Can you imagine the time lost? I wanted to design an app which put Kashmir at its residents’ fingertips.”

The Android app, Dial Kashmir, lists more than 500 contacts of essential and commercial services in Kashmir
It took Mushtaq two weeks to design the Android app. “The difficult part, predictably, was gathering data from government agencies and websites. When I was working on compiling the pincodes of various areas in Kashmir, I realised that the government website had them all wrong. So I had to reach out to friends and acquaintances on the social media to help me out. I put them up only a week ago.”
Reactions to Dial Kashmir have taken Mushtaq by surprise. “People here call me the Android girl,” she laughs. “The app has been rated 4.7 out of 5 on Google Play and has seen over 1,000 downloads.” Dial Kashmir’s Facebook page, too, is flooded with locals raving about how the app helped them fill government forms, contact the municipal body to clear a dead carcass found at Jhelum and so on. “I have received many emails from people all across the country telling me that Dial Kashmir has encouraged them to build a similar app for their town or area. I believe someone in Kerala is working on a similar app now,” says Mushtaq.
She is not unaware of how most educated youngsters want to -- rather, have to -- move out of the Valley to build successful careers. “Employment opportunities here are not as good as those outside, but I want to set an example and change that. Kashmir needs its educated youth, and I want to set an example there.” Mushtaq says she wants to be an entrepreneur and work for the Valley. Her next app, she adds, will be something that could boost tourism in the state. “How can we speak of changing Kashmir when we cannot even stay back and work for it? Complaining hasn’t worked for us so far. Someone has to stop waiting for the government to step in and take Kashmir’s development in their own hands – and that could be me.” 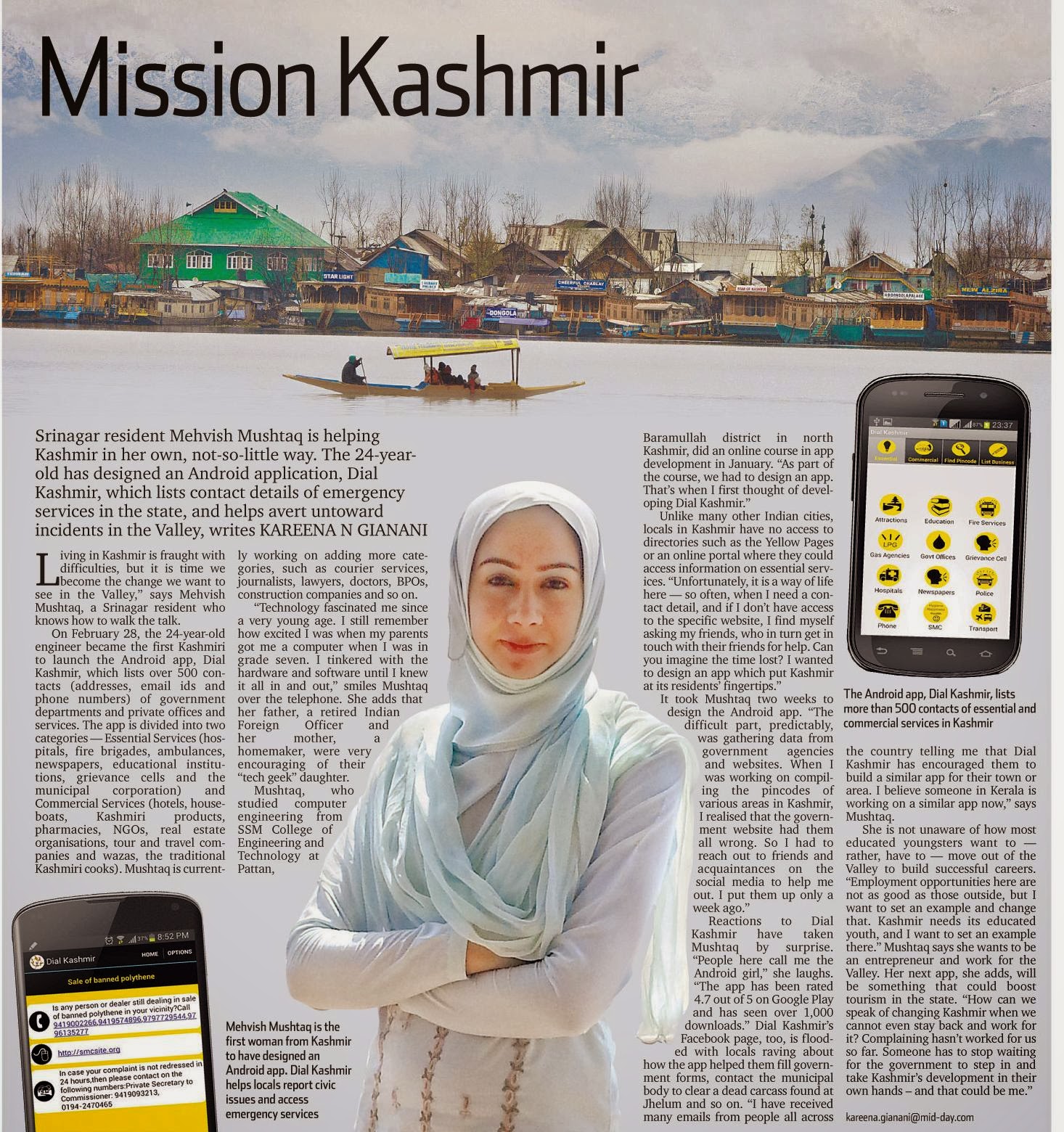 Popular posts from this blog

February 09, 2015
From HT Brunch, November 30 Even as you’re reading this, winds of change are blowing across India. From places as busy as Mumbai, as faraway as Erode and as troubled as Kashmir, great new ideas are sprouting, promising a better tomorrow, making us proud. Our nation of jugaad is taking a giant leap forward – inventing, adapting and creating bold new ways to make your everyday life easier. We scouted the length and breadth of the country to find the brightest innovations, and roped in author and entrepreneur Rashmi Bansal to pick the ones with the most promise. This is a list that is as diverse as it’s ingenious. They’ve already inspired us to dream big – in full-HD, actually! Now it’s your turn…
Post a Comment
Read more

This girl wants you to 'Dial Kashmir'

October 27, 2014
Abhishek Mande Bhot   Meet Mehvish Mushtaq, the first Kashmiri girl to develop an Android app dedicated to the state of Jammu & Kashmir. W hen she wanted to telephone a cousin's school some years ago, Mehvish Mushtaq was lost. The school's website was down. She didn't have a phone book handy and there weren't any directory services that could help her with it. After considerable search, that included calling up the cousin's classmates, she finally got the number. Then there were occasions when a hospital's number wasn't easy to come by. Each time a situation arose, she would scramble for information. Mehvish Mushtaq stays in Srinagar where information isn't easy to come by. Telephone numbers and contact details are available but they remain scattered online. So when as part of an online course on Android application development, Mehvish Mushtaq was required to create an app, she knew just what she wanted to make.
Post a Comment
Read more